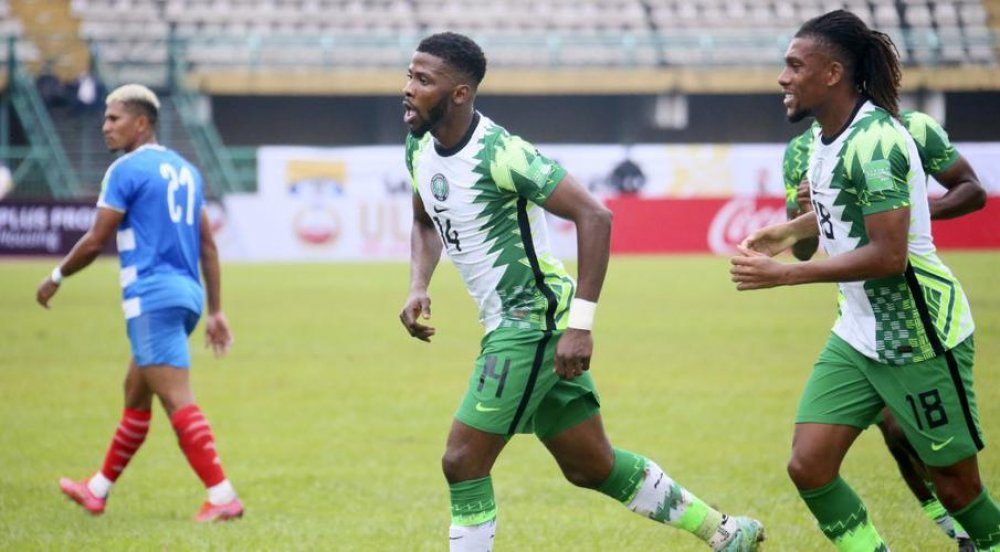 The win will give the Super Eagles much-needed confidence ahead of their second Group C game against Cape Verde on Tuesday, while the Lone Star faces the Central African Republic on Monday.

The Super Eagles dominated the game from the start and Ola Aina gave the first warning in the 10th minute when the thunderous shot from the Torino FC fullback narrowly missed the target.

The deadlock was broken seven minutes before the half hour after a perfectly executed corner kick routine between Kelechi Iheanacho and Alex Iwobi.

Iwobi fielded Iheanacho, who then scored once, before unleashing a powerful low shot that defeated goalkeeper Ashley Williams near the post and gave Nigeria a 1-0 lead.

The hosts kept firing forward after taking the lead and they managed to score their second goal of the game just before half-time, again involving Iheanacho and Iwobi.

Iwobi tapped the ball back and Iheanacho jumped and shot past Williams from close range to give Nigeria a 2-0 lead en route to halftime.

Chasing a hat-trick in the second half, Iheanacho scored an inch-perfect free kick for Leon Balogun in the 49th minute, but the lanky defender headed just wide.

Determined to put his name on the scoresheet, Nigeria’s highly regarded striker Victor Osimhen hit the crossbar after hitting Moses Simon’s cross just after the hour.

Trailing his side 2-0, Liberia coach Peter Butler decided to introduce striker Peter Wilson as the Lone Star looked set to pull one back in the closing stages and make it a nervous end for the Super Eagles.

However, the hosts defended very well in the closing procedure and in the end the match ended in a 2-0 victory in Nigeria’s favour.