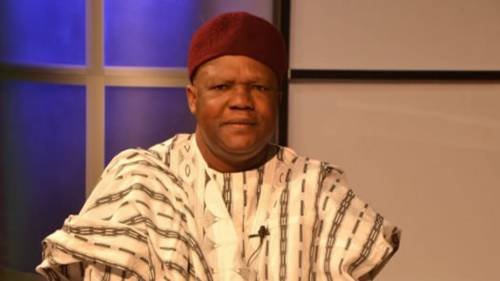 A former deputy governor of the Central Bank of Nigeria (CBN), Dr. Obadaiah Mailafia, has said that Nigeria is not fit to be called a nation because of the many actors in control.

The former CBN governor said Grace has left Nigeria, reducing the country to the most terrorized and impoverished country in the world.

Mailafia stated this at the Reconciliation House in Akure, Ondo State, during a symposium organized by Forum for Good Governance, of the Towards Revival for All Nations (TRANS 21).

See also  (Video) Former BBNaija, Saga Excited As Nini Joins Him To workout For The First Time After The Show

The former CBN governor who spoke of ‘The Role of the Church in Nation Building’ claimed there is an ongoing plan to ‘Islamize and Fulanize’ Nigeria.

He noted that Boko Haram terrorists now control half of the state of Niger and that Abuja could easily be overrun if they completely take over Niger.

He said: “Nigeria has fallen from grace to become the most terrorized nation in the world. Nigeria cannot be described as a nation because power is not only in the hands of the government. There are other blocks that have coercion now.”

“The kind of Islam that comes out of the Sahara is dangerous. They want to take over your land and enslave you. Christians must stand up to protect it.

“In the northeast alone, more than 3,000 churches have been destroyed, more than 400 priests and pastors have been killed. And there’s a pattern that’s only for Christians, and that’s beheading,” he said.