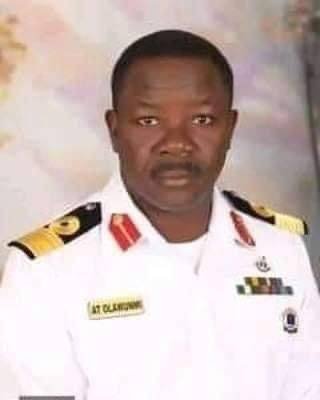 The Defense Intelligence Agency has confirmed SaharaReporters’ report that it wanted to testify to a former Nigerian naval commodore, Kunle Olawunmi, for exposing in an interview how President Muhammadu Buhari’s government refused to investigate senior politicians named by Boko Haram terrorists. as their sponsors.

The DIA said in a superficial statement that it invited Olawunmi to its headquarters in a “text message to come across as a retired military officer to shed more light on the information that would help the AFN continue its fight against terrorism, insurgency and insurgency.” and banditry.”

Despite the amount of information about the activities of the insurgents and bandits that plagued the country, the intelligence agency said it was waiting for a retired military officer to help fight the insurgency.

SaharaReporters had previously reported that the DIA had asked Olawunmi to come to its headquarters in Abuja on Tuesday with his international passport, which may be confiscated.

In a response obtained by SaharaReporters on Saturday afternoon, a DIA official said: “Please gentlemen of the press. There is an online news from SaharaReporters that the DIA has ordered for the arrest of Cdre Olawunmi rtd. Soon we will come with a statement. You remember he said he was privileged (sic) to a lot of information during his media interview on Channels. He was only invited (sic) via text message to come over as a retired military officer to shed more light on the information that would help the AFN continue its fight against terrorism, insurgency and banditry.

Also, remember that the CDS has just completed its tour of the 6 geopolitical zones where it asked for the support and cooperation of retired military officers. Arrest of people was not part of that.”

“The agency has stated that retired naval commodore Kunle Olawunmi was wanted for spilling the beans on Boko Haram sponsors in the Buhari regime. They asked him to come to the DIA office in Abuja with his international passport on Tuesday,” a top source said.

SaharaReporters had reported last Wednesday that Olawunmi was speaking when he was featured on Channels Television’s ‘Sunrise Daily’ breakfast program.

He had condemned Tuesday’s attack by bloodthirsty bandits on the Kaduna campus of Nigeria’s main military university, the Nigerian Defense Academy, where two military officers were killed and another kidnapped.

The professor of Global Security Studies had said, “It’s an anomaly; you will not attack the Nigerian Defense Academy and will not get away with it. In 2017 I conducted an investigation by the Minister of Defense who wanted me to find out what was happening with the training and security there (NDA). I remember spending about a week in the NDA with the commander and staff, but something struck me: every Friday the gate of the NDA is thrown open and everyone has access to pray in the mosque.

“That’s when the terrorists have time to profile our security environment. It’s always been that way. I have served in military intelligence for the past 35 years. Our problem is religion and socio-cultural.”

Olawunmi had added that he was a member of the intelligence letter at Defense Headquarters during the leadership of the then Chief of the Defense Staff, General Abayomi Olonisakin (Retd.).

The intelligence expert said he told the then CDS that the main focus of the Boko Haram insurgency that ravaged the northeast and spread to other parts of Nigeria was the sponsor.

“I then told General Olonisakin that the core of this problem cannot be solved in the same way that we solved the problem of the Niger Delta. The Niger Delta problem was actually solved by me during (ex-President Umaru) Yar’adua and I told them that we can’t use that same template for Boko Haram.

“I told General Olonisakin to look at the center of gravity of the problem. In 2016-2017, I became a member of the committee, which included former Army Chief of Staff, Lieutenant General. Ibrahim Attahiru who died.

See also  IPOB: 'There is a state-sponsored terrorism aga...

“I told them that Boko Haram’s focus in Nigeria is the sponsors of the program. It was beyond us because the work we had to do was kinetic, but we cannot solve the problems of the Boko Haram sponsors who were in the Buhari government as we know them. That’s why we couldn’t pursue that aspect that could have solved the problem, because we have to arrest people.

“Recently 400 people gathered as sponsors of Boko Haram, why has the Buhari government refused to try them? Why can’t this government bring them to justice if they are not partisan and part of the charade that is going on?

“You remember that this Boko Haram issue started in 2012, when I was in military intelligence at the time. We arrested those people. My organization has been questioned and they (suspects) mentioned names. I can’t get on the air and start naming people currently in government that I know named the guys we arrested. Some of them are governors now, some in the Senate, some in Aso Rock.

“Why would a government decide to cause this kind of embarrassment and uncertainty in the sense of what happened yesterday (Tuesday at the NDA)?”

Olawunmi had also said that the State Department had great information about terrorists, but that they could do nothing but use the commander in chief’s body language.