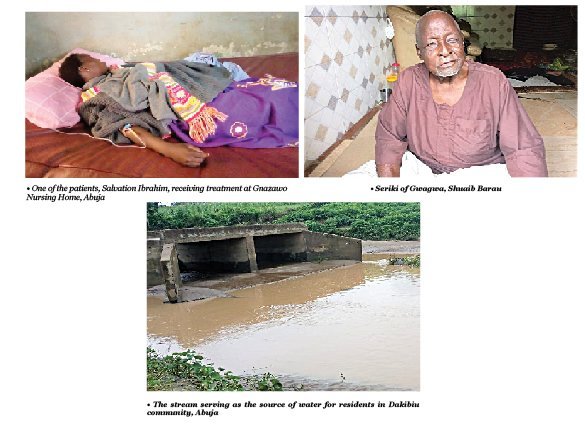 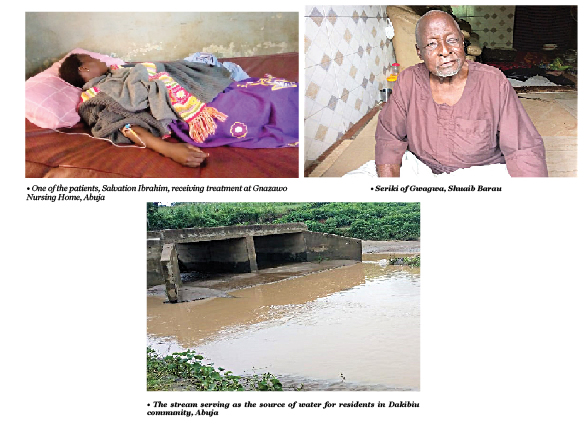 As cholera spreads across the country, residents of some communities in Abuja’s city council battling a raging cholera outbreak are clamoring for help to stop the spread of the infection. curbing the disease. LARA ADEJORO who visited the communities reports:

Sixteen-year-old Salvation Ibrahim woke up with a fever on July 24, 2021, but she didn’t think it was anything serious until she started pooping around 4 p.m. that day. The stool went on to throw up a greenish substance.

Her parents thought she would be fine the next day, but her condition worsened – she became severely dehydrated and her eyes began to darken.

Then her father bought her medicine, but instead of getting better, she passed out at 8 am.

The concerned father, with the help of his brother, carried her on his motorcycle through the narrow muddy route from Dakibiu to Kabusa, the nearest community with a health care facility.

Dakibiu to Kabusa takes 49 minutes, which is 24.5 miles, according to Google map.

Upon arrival at the Gnazawo Nursing Home, popularly known as Gnazawo Clinic, the medics already knew what was wrong with her and immediately started treatment. They hooked her up to IV tubes to hydrate her intravenously.

Gradually she started to regain her strength and Monday at 10:00 am Salvation was on her 12th infusion.

No fewer than 10 patients have been treated for cholera in the clinic, but one died, our correspondent learned.

“Once they get here, we treated them right away, but the man who died was brought in late and his eyes were already sucked in. We tried our best, but we lost him.

“People come here from other neighboring communities for treatment because they don’t have access to a health center,” said a clinic staff member, Mr. Shadrach Doggo.

Salvation’s father, grieving, told Mr. Ibrahim to take the risk to save the life of his first child.

“From Saturday to now I have spent up to N12,000. I had to rush her here yesterday when she passed out,” he said in Hausa language.

According to a public health professor, Tanimola Akande, the bacteria that cause cholera are expelled through the stool. They can be released into the environment to infect other people.

He said: “Poor hygiene, especially through open faecal disposal, poor hand washing after defecation and drinking water from contaminated sources are common modes of transmission and if left untreated, the disease can lead to death.”

This year, a new wave of cholera outbreaks has devastated the Nigerian population, infecting many civilians in several communities and killing 526 people in 17 states and the Federal Capital Territory, between January and July this year, the Nigeria Center for Disease Control said in a statement. recent report.

A total of 22,130 suspected cases of cholera were reported from 18 states and the FCT during that period, according to the health agency.

The health agency said that while it has supported states to ensure a coordinated, prompt and effective response to the outbreak, security concerns have caused access to some communities.

Other challenges include inadequate vaccines to cover all LGAs, wards and settlements with cholera outbreaks; as well as inadequate infrastructure for health facilities and cholera products for treating patients.

See also  3 Things You Should Consume To Cleanse Your Kidneys

Akande, who is also a former national president of the Association of Public Health Physicians of Nigeria, said adequate monitoring is very important to detect affected places and people early and provide proper treatment for identified cases in health facilities.

“It is important to educate and make people aware of the measures they can take to prevent cholera.

“These measures include providing drinking water and washing hands regularly with soap and water, especially after defecation. Toilet facilities should be easily accessible in homes and public places,” he said.

Shrubs and stream to the rescue

A visit to the Dakibiu community shows how great the challenge the residents of the area face.

Community residents live in impoverished conditions; there is no health center, they have no access to clean water and currently depend for their water supply on the polluted stream that flows from the pedestrian bridge.