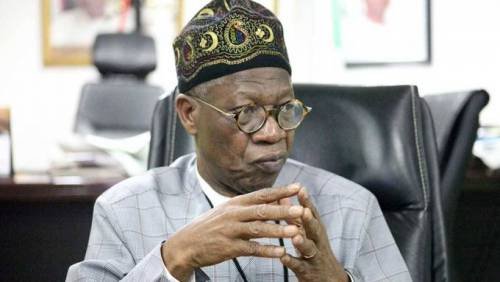 According to News Agency of Nigeria, the minister also said that the entertainment industry in Nigeria is an important factor in the global recognition of the country as he basked in the recent famous Grammy awards of the Nigerian singers, Damini Ebunoluwa Ogulu, known as Burna Boy. and Ayodeji Balogun, aka Wizkid.

The minister announced this on the island of Sal, Cape Verde, after a meeting with UNWTO Secretary General Zurab Pololikashvili.

Mohammed also admitted that foreigners visit Nigeria more for business than for tourism, while he was proud of the creative industry mainly occupied by Nigerian youth that his director, President Muhammadu Buhari, had once called lazy youths for ‘doing nothing’.

Recall that on Wednesday, April 18, 2018, Buhari said Nigerian youths were lazy despite their resilient efforts amid scarce resources to support themselves.

“More than 60 percent of the population is under 30, many of them have not been to school and they claim that Nigeria is an oil producing country, therefore they should sit and do nothing, and housing, health care, education for free,” he said. Buhari during a panel appearance with world leaders at the Commonwealth Business Forum in London in 2018.

However, his minister Mohammed pointed out that the Nigerian government has chosen the tourism and creative industries because of Nigeria’s comparative advantage and strengths in the fields of movies, music and fashion.

“By comparison, Nigeria is not very strong in destination tourism, although the country attracts many travelers who are more on business,” Mohammed said.

Likewise, entertainment industry stakeholders have complained about the lack of support for them by the government, saying it’s all talk and no action.

In 2016, Mohammed inaugurated a 28-member committee to review the bill establishing the Dying Motion Picture Practitioners Council (MOPICON) before it was presented to the National Assembly as an executive bill for transposition into law.

A policy document from President Buhari’s administration on the entertainment sector, which he released in the run-up to his first election in 2015, pledged to help Nollywood develop into a world-class film industry to compete favorably with Hollywood and Bollywood.

“I will also support the creative and performing arts with the necessary environment in which our great entertainers do not end their lives in abject poverty as they do today,” the document reads.

However, more than six in the Buhari government have failed to keep their promises.

After meeting with the UNWTO Secretary General, Mr Mohammed said the regional conference would focus on tourism and the creative industries.

“Nigeria is better known for its music, movies and culture; and Nigerian music and movies are exported for foreign exchange.

“There are many Nigerian artists who have gained worldwide recognition, including Burna Boy and Whiz Kid, who have won the latest Grammy awards in various categories,” explains Mohammed.

Established on November 1, 1975, the UNWTO is the UN specialized agency for promoting responsible, sustainable and universally accessible tourism.

Mohammed is on the island of Sal, with other ministers of African culture and tourism, to attend the 64th Conference of the UNWTO Commission on Africa and the second edition of the UNWTO Global Tourism Investment Forum.

The minister also noted that Burna Boy, a Nigerian entertainment superstar, recently sold out at London’s 02 Arena. Burna Boy reportedly closed “02 Arena with an incredible 12,000 ticket sales for his concert on August 27.”

The 61st edition of the ongoing UNWTO Commission for Africa conference was held in Nigeria in 2018.