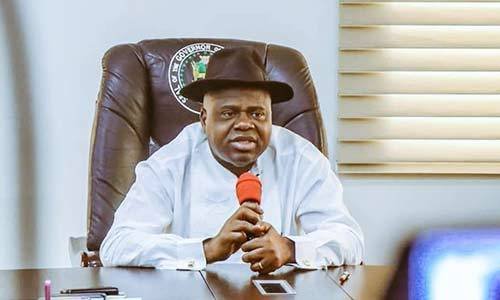 Eyewitnesses told SaharaReporters that the governor and his aides disrespected the airport’s security rules and procedures.

The governor had arrived at the airport for United Nigeria Airlines’ inaugural flight to Bayelsa International Airport.

Upon arriving at the airport around noon, the governor and his aides went to the checkpoints where they showed outright disregard for airport rules that activated the security alarm system, sources said.

Speaking to SaharaReporters, a passenger who witnessed the incident said: “The airport security officers made every effort to get them to go through the security screening procedure, but they refused to run their bags through the screening X-ray machine.

“They kept saying the bags belonged to the governor and they all pushed through the checkpoint. The alarm system has been activated.

“Maybe they got on the plane with their guns. The airline (United Nigeria Airline) must of course return them all to the checkpoint, because the captain is not allowed to fly with someone who has refused to be checked on a commercial flight,” said another eyewitness, who is a foreigner.

“It’s a little disappointing that a senior government official is doing this and allowing his aides to do the same.

“The airport security officers begged the governor and his aides, but that didn’t stop them from flying, even though this is a basic rule in the airline industry. It’s insane, this can only happen in Nigeria.”

This is not the first time powerful Nigerians, especially politicians, have refused to follow airport security procedures in Nigeria.

Aviation and airport sources told our correspondent that he used to break procedures, especially at airport security checkpoints in Lagos.

Several concerned passengers also told SaharaReporters about their observations on three separate journeys between March and September this year, when Mr. Fani-Kayode refused to submit to the security agency’s routine check after activating metal detectors.

The dates were March 10, June 16 and September 16. It turned out that the former minister always offered security officials the same “arrogant” excuse that he was a former minister of aviation and as such could not submit to a search.