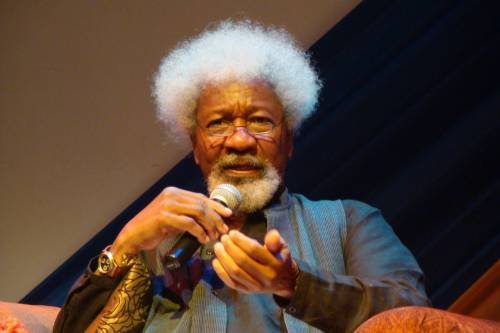 Nobel laureate Prof. Wole Soyinka has called on the government of the Republic of Benin to release Yoruba Nation agitator Sunday Adeyemo, popularly known as Sunday Igboho, to continue his journey.

Speaking to journalists in Lagos on Friday during an interactive session titled “Sanctions Unsettled: Chasing the Mosquito with a Sledgehammer,” the elder statesman said the separatist movement has committed no crime against Nigeria.

Men from the Department of State Services raided the Ibadan, Oyo State, home of the activist on July 1, 2021, killing two and arresting 12 of his aides.

Igboho later fled to the Republic of Benin where he and his wife were arrested on July 19, 2021 by the International Criminal Police Organization at Cadjehoun airport in Cotonou en route to Germany.

His wife, Ropo, was released and Igboho faces charges of illegal migration in the West African country and is seeking asylum to evade the federal government’s request to evade his extradition over arms-building allegations he had refused.

The Nobel laureate said Igboho’s insult was opposition to the tyranny of Fulani herders against his people in Oyo state.

Soyinka said: “I refuse to believe that Igboho committed any offense other than agitation against Fulani tyranny on his people. He peacefully demonstrated his position. I cannot consider that a criminal. Agitating for secession is not a criminal act as long as it is peaceful You don’t have to criminalize that.”