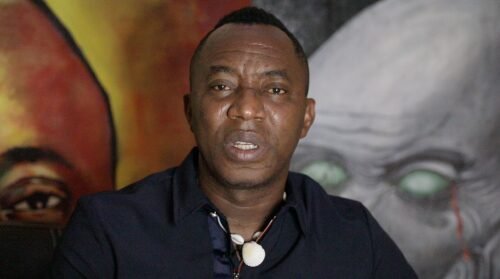 Balogun revealed in a video the claims of Omega Fire Ministries founder Apostle Johnson Suleman that he commanded angels to deposit money into the bank accounts of some believers in Auchi, Edo State, and Atlanta, Georgia, United States.

On Wednesday, the Force Criminal Intelligence and Investigation Department (FCIID) detained Balogun for criticizing Suleiman over the cleric’s claim that he commanded angels to deposit money into the bank accounts of some members of his congregation.

Balogun’s lawyer, Barrister Inibehe Effiong, made this known on Wednesday shortly after he accompanied Balogun to the FCIID in Area 10, Garki, Abuja about a petition Suleman had written against him over alleged criminal defamation and cyberstalking.

In a response, Sowore stated that Nigeria’s police force is used by non-state mobsters, citing similar cases of police abuse of power.

Sowore questioned the rationale behind Balogun’s arrest and called for the arrested blogger’s release.

He said: “It is a disgrace that Nigeria’s police are offering themselves to be hired for personal hit jobs on behalf of mobsters instead of going after the mobsters in government and non-state mobsters.

“How do you detain a YouTuber for criticizing scams known as ‘wonder money warnings?’ The IGP (Inspector General of Police) must release Israel Balogun immediately!He has committed no offense known in law against Apostle Johnson Suleman.

“In recent weeks we have seen the police being used by a former Attorney General, Bello Adoke, to go after Olanrewaju Suraju for exposing his corruption, a former minister, Femi Fani-Kayode, deployed the police against his estranged wife, Precious Chikwendu and now a clergy has appointed the police hierarchy to track down free speech.

“Yesterday I heard that a former governor of Imo state, Ikedi Ohakim, also used the police at the FCIID against an estranged mistress.

“The governor of Katsina state, Bello Masari, a few months ago used the FCIID to pursue a whistleblower Shehu Mahdi for allegedly defaming him.

“These cases are some of the many abuses of police power that are notoriously widespread. We must stop the police now before they provoke another #EndSARS! #RevolutionNow.”