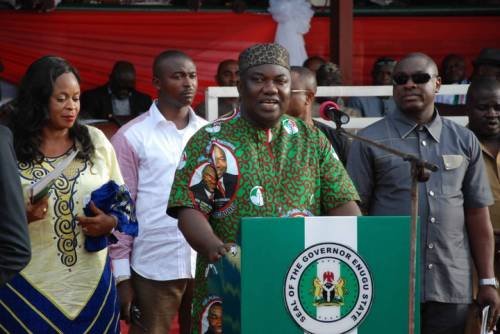 The Nigerian military has arrested Mr. Tochukwu Okeke, the senior special assistant for security affairs to the governor of Enugu State, Ifeanyi Ugwuanyi, and detained for more than a month.

SaharaReporters learned that Okeke was arrested in July for his alleged membership of the indigenous people of Biafra and has since been held in the 82nd Division barracks in Enugu state.

SaharaReporters concluded that despite an order from the Federal Supreme Court in Port Harcourt, Rivers State, the Nigerian military continued to hold Okeke in custody.

The court last week ordered the Nigerian army to release the Senior Special Assistant unconditionally, but the military authorities refuse to comply.

Okeke’s attorney, Chinedum Agwaramgbo, had filed a lawsuit to enforce fundamental rights for the release of his client who was imprisoned by the 82nd Division.

According to the supporting affidavit attached to the motion, Okeke was arrested by respondents’ agents for allegedly being members of IPOB and its Eastern Security Network.

On July 29, 2021, the court had ordered the military to present Okeke and demonstrate why the detainee should not be released on bail.

However, the respondents ignored the court’s order as they did not respond and did not file legal representation, forcing the judge, Stephen Pam, to issue an interlocutory judgment for Okeke’s unconditional release.

The source claimed that one of the syndicates’ camps was raided in Akpawfu-Amangwunze in the Nkanu West Local Government Area where various weapons, ammunition, cars and amulets were recovered.

However, the Nigerian military, known for violating court orders, refused to release Okeke as ordered by the court.