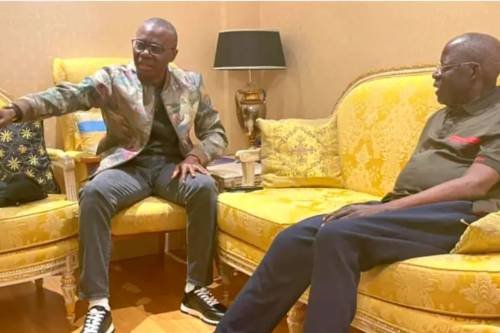 Lagos state governor Babajide Sanwo-Olu met with the national leader of the All Progressives Congress, APC, Bola Tinubu in London on Tuesday.

Details of the meeting are still unknown, but it is believed to be related to stories circulating about Tinubu’s health status, Vanguard reports.

According to reports, the meeting was held to end speculation about Tinubu’s health condition.

SaharaReporters further found out that Tinubu, who has made several medical trips this year alone, had surgery about two weeks ago and maybe charged another due to an undisclosed illness.

The APC national leader has long been absent from official and party positions in the country amid talks that he will be positioned for the 2023 presidency to succeed the incumbent repressive regime of Muhammadu Buhari.

“He had surgery last week,” said an authoritative source.

In January 2021, Tinubu was also reported sick and hospitalized in Paris, France. Tinubu had previously complained of exhaustion and traveled outside to rest before news of his collapse went viral.

In the first week of January, he was flown to Paris for medical treatment.

SaharaReporters had reported on June 15 that Tinubu was also in Paris, struggling with a number of age-related illnesses.

“Tinubu is in Paris, France for a medical check-up. His health is deteriorating. Old age and other things, but he still wants to be president. This could mean a new medical tourism presidency for our country,” a top source had revealed at the time.