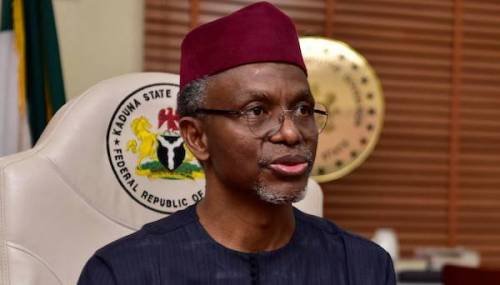 Kaduna State Governor Nasir El-Rufai is currently in London, the United Kingdom, amid reports that the governor is struggling with an undisclosed condition and is receiving medical treatment.

SaharaReporters learned that El-Rufai was visited on Friday by Kaduna Senator, Uba Sani and other close associates.

The politicians had lunch together as part of desperate efforts to cover up the ill health reported by the governor.

There were reports Friday in certain circles that the governor had been hastily flown out of the country a few days ago after becoming mysteriously ill.

There is no official confirmation from the state government yet.

The governor of Kaduna and his staff were then photographed on Friday while having lunch at an Indian restaurant in London.

According to unconfirmed reports, El-Rufai flew abroad for treatment a few days ago and his deputy, Ms. Hadiza Balarabe, is currently acting on his behalf.

Balarabe received on behalf of the governor the army chief of staff, Lieutenant General Faruk Yahaya, who was on a working visit to the Kaduna State Government House on Wednesday.

London appears to have become the latest medical tourism destination for top Nigerian leaders, including President Muhammadu Buhari who returned to Nigeria on Friday after spending about two weeks in London.

Also, National Leader of the All Progressives Congress and former Governor of Lagos State, Bola Tinubu, still in London, UK, is recovering from surgeries he underwent in the United States, as collected exclusively by SaharaReporters.