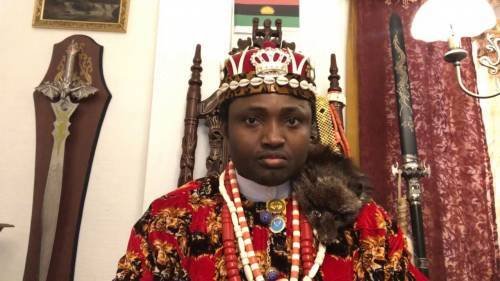 The Indigenous People of Biafra (IPOB) has said Simon Ekpa, the self-proclaimed disciple of Finland’s Nnamdi Kanu, is not a member of the group.

In a statement dated August 21, 2021, signed by Anthony Obasi and Chika Madu, National Coordinator and National Secretary of IPOB Finland, respectively, the group announced that Ekpa is not a registered member of the group in Finland.

Ekpa has been in the news for seemingly resisting the group’s modus operandi since Kanu’s recent arrest and detention.

He was fired from Radio Biafra’s broadcaster for allegedly violating the rules and regulations governing the operation of the station.

The Nigerian-Fin had stated after his resignation that the “Biafra struggle has entered the AUTOPILOT phase, a very dangerous phase where we have no control over what happens. To your tent, O Israel.

“I am Simon Ekpa, Mazi Nnamdi Kanu’s student on the restoration of Biafra. Changing the story of yesterday.”

However, the group refuted its statement by saying: “We also want to clarify that in IPOB we have nothing or no one known as autopilot. Anyone who uses such a title is not IPOB and is breaking our rules. Anyone who claims so must immediately withdraw before being ashamed.”

Promoting the breakaway group’s move to distance itself from Ekpa, according to a statement from its spokesperson, Emma Powerful, and obtained by SaharaReporters on Sunday, IPOB said those who associate with Ekpa as a member of IPOB are doing so to their detriment.

The statement reads: “This is to inform the IPOB relatives worldwide about the raging issues of whether Mazi Simon Ekpa is a registered member of IPOB Finland where he lives.

“We, the IPOB Finland family under the command and direction of Onyendu Mazi Nnamdi Kanu, want to make it categorically clear to whom it may concern that Mazi Simon Ekpa is not a member of IPOB Finland. He has never been part of IPOB before and to date, according to our records, he is still not a registered IPOB member.

“This memo has been issued to set the record straight for everyone so that henceforth, anyone dealing with Mazi Ekpa on issues related to IPOB worldwide will have themselves to blame.”