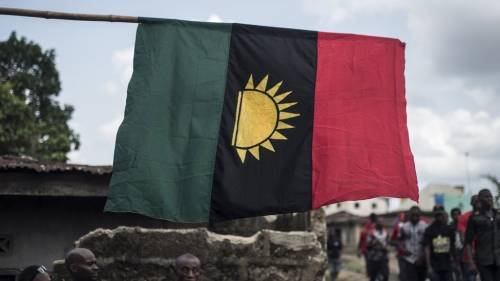 The Indigenous People of Biafra (IPOB) has claimed that security forces plan to attack residents of the Southeast region on Monday.

In a statement from its spokesperson, Emma Powerful, obtained by SaharaReporters on Sunday, the group also claimed that security agents also blamed the attack on IPOB members and its militia wing, Eastern Security Network (ESN).

IPOB had ordered residents of the Southeast to “sit at home” every Monday on Monday, August 9, but by the following Monday it announced that the detained leader, Nnamdi Kanu, had ordered the sit-at-home order to be observed only on the day. to take. he appears in court.

However, when the separatist group reminded people in the region on Monday to do their business, it also warned security agents that it would not tolerate an attack on its members and benefactors.

The statement reads: “The Intelligence Unit of the Indigenous Peoples of Biafra, IPOB, has uncovered secret plots by the security forces of Nigeria, notably the Department of State Services, DSS; and the police to disguise themselves as IPOB and ESN agents to attack traders who come out tomorrow for their legitimate business.

“We therefore want the world, especially residents of Biafra, country that (sic) IPOB has suspended since two weeks ago its first statement from Monday. It therefore makes no sense that we simultaneously carry out the suspended order.

“IPOB reiterates that there are no more Ghost Mondays in Biafra land in solidarity with our detained leader, Mazi Nnamdi Kanu. Sitting at home is only observed on the days when our leader appears in court. Such days will be announced well in advance.

“Everyone is hereby notified of this malicious plot. IPOB will not tolerate any attack on any Biafra or resident of Biafra in any disguise. People should be able to conduct their business without any form of molestation or intimidation.”

In the statement titled “IPOB Exposes Security Agents’ Plot to Attack People on Monday and Blame ESN,” the group ordered industry leaders to open up about business, adding that security agents would be held accountable for any attack on people on Monday. .

“We are warning politicians and traitors, including security agents who have designed to destroy IPOB and tarnish our hard-earned global reputation, to retrace their steps. Biafrans are free to come out tomorrow and every Monday to go about their normal business. All market leaders in the country of Biafra are advised to follow this guideline and ensure that their markets are open for business.

“Security agencies have perfected plans to carry out attacks on innocent people on behalf of ESN and IPOB volunteers. We have no plans to force sitting at home again.

“Nigeria’s security officers must be held responsible tomorrow for any attack on innocent Biafrans. They want to wear jeans and fight underpants and the brand of ESN and IPOB volunteers. Our people should resist any attempt by anyone to attack them tomorrow.

“We understand that all DPOs (Divisional Police Officers), DCOs and other senior police officers in Enugu have held meetings to perfect this plan to attack innocent Biafrans and label the ESN attacks.

“A fleet of Hilux vehicles has also been reserved for this assignment tomorrow. Our people need to be careful,” the statement added.