The Head of House game this week served as the final part of this week’s Nomination process. Back to the regular order of things, the Housemates favourite Head of House game mat was brought back and there were literally 35 steps between the remaining Shine Ya Eye geng and their goal of winning the HoH title.

Biggie added a new element today by creating the separation of the Head of House and the Veto Power. Tonight, the housemate who came second in the game would win the Veto Power and is expected to use it to save a Nominated Housemate and replace with someone who had not been Nominated.

The obstacles were harder, but they had added time to complete them so Big Brother expected the Housemates to be fine.

Obstacle A: Move the ping-pong ball.

Using only the provided spoon, the geng was expected to move a single ping-pong ball from point A to point B. The ball had to be placed on the spoon before they began to transport it. They were not allowed to use their hands to touch the ball while attempting to transport it.

If the ball fell, they had to start the obstacle all over again. The Housemates also had to walk the beam as they transported the ball. If they fell off the beam, the Housemate would have to start at the beginning of the obstacle again.

Obstacle B: Roll a 6

Biggie encouraged the Housemates to consider this obstacle the easiest for the night. All they had to do was roll a six on the die before proceeding. This meant, rolling a six to set themselves free, then immediately rolling another number. ONLY the number rolled after the six could be counted on the mat.

The Housemates had to open and drink a bottle of refreshing water.

As usual, this game of luck is nothing that a Housemate can plan to get right except for hoping for fate to work in their favour.

Nini had a pretty shaky start while Queen tried as hard as she could, but she couldn’t get far.

It wasn’t an easy course for Cross. He had to restart the course after landing on the box that took him back to the start.

Angel had a late start, but she still made it quite far in the course. Yousef was lucky to have a ‘6’ in his early attempt, but an obstacle slowed him down before his game came to an end.

Saga was very unlucky. He didn’t get a six until the buzzer went off. It took quite a while, but Pere eventually unlocked his game with a six and made it all the way to box 15.

Emmanuel got a ‘6’ on his first try and made it all the way to box 26. Saskay, Whitemoney and Liquorose gave it their all, but they could only get so far.

Emmanuel won HoH. His position as Head of House nullifies his Nomination for this week. What a close shave for Mr Africa! The first runner up during the HoH game this evening was Pere. This meant that he held the Veto Power for this week. He had to save someone and Nominate a Housemate that had not been Nominated. Pere saved himself and Queen in his place. What an awkward announcement since he was sitting right next to her!

Saga, Liquorose, Whitemoney, Jaypaul, Jackie B, Saskay and Queen are up for possible Eviction on Sunday. They are not allowed to campaign for votes from their perceived supporters.

Emmanuel elected Liquorose as his Deputy Head of House. We can’t wait to see how the EmmaRose handles the #BBNaija House this week! 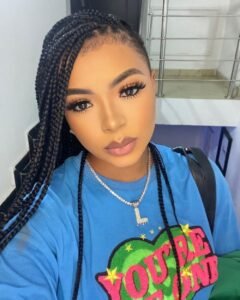