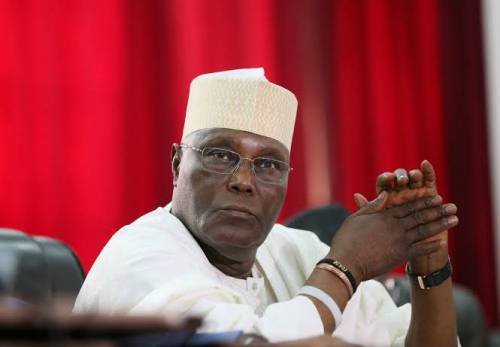 SaharaReporters has obtained a report on how Ex-Vice President Atiku Abubakar was the subject of an investigation 11 years ago by the United States Senate Committee on Homeland Security and Government Affairs, chaired by Senator Carl Levin.

The report details how Atiku, as vice president of Nigeria, used offshore companies to transfer millions of dollars to his fourth wife in the United States, Jennifer Iwenjiora Douglas Abubakar, between 2000 and 2008.

Originally a resident of Onitsha, Anambra State, and a Nigerian Television Authority News correspondent in the 1980s, Jennifer later moved to and became a citizen of the United States.

According to the report submitted to the US Senate by the committee on Feb. 10, 2010, the illegally transferred money made Atiku an “employer of labor” and a proud owner of the American University of Nigeria (AUN), a school whose tuition fees are more than 99% of Nigerian students cannot afford it.

SaharaReporters gathered that the leader of the People’s Democratic Party (PDP) founded AUN at a time when public universities were collapsing under him and Obasanjo and poor Nigerian students were languishing at home due to strike action over lecturing about poor funding.

Former President George Bush had banned Atiku and other corrupt politically exposed persons from issuing US visas in 2004.

The US Senate investigation in which the former Nigerian vice president was charged was prompted by the US government’s concerns about corruption in the Third World and its corrosive effects on the development of fair government, democratic principles, and the rule of law.

The report reads in part: “From 2000 to 2008, Jennifer Douglas, a US citizen and the fourth wife of Atiku Abubakar, former vice president and former candidate for president of Nigeria, helped her husband transfer more than $40 million in suspected funds to the United States, via wire transfers sent by offshore companies to US bank accounts.

“In a 2008 civil complaint, the U.S. Securities and Exchange Commission alleged that Ms. Douglas received more than $2 million in bribes from Siemens AG, a large German company, in 2001 and 2002.

“While Ms. Douglas denies doing anything, Siemens has already pleaded guilty to US criminal charges and settled civil charges related to bribery and told the subcommittee that it sent the payments to one of its US accounts.

“In 2007, Mr. Atiku was the subject of corruption charges in Nigeria related to the Petroleum Technology Development Fund. Of the $40 million in suspected funds, $25 million was transferred by offshore companies to more than 30 US bank accounts opened by Ms. Douglas, mainly by Guernsey Trust Company Nigeria Ltd., LetsGo Ltd. Inc., and Sima Holding Ltd.

“The US banks that held those accounts were sometimes unaware of her PEP status, and they allowed multiple, large offshore transfers to her accounts. When every bank started to question the offshore transfers, Ms. Douglas indicated that all the money came from her husband and claimed to have little knowledge of the offshore companies that sent her money.

“When a bank closed its account because of the foreign transfers, her lawyer helped other banks to offer a new account. In addition, two of the offshore companies transferred approximately $14 million over five years to the American University in Washington, DC, to pay for consultancy services related to the development of a Nigerian university founded by Mr. Atiku Abubakar.

“American University accepted the transfers without asking the identities of the offshore companies or the source of their funds, as the university had no legal obligation under current law to make inquiries.

“Fighting corruption is an important value and goal of the US because of its corrosive effects on the rule of law, economic development, and democratic principles. In 2001, the Patriot Act made the acceptance of foreign corruption proceeds a crime against money laundering for the first time in the US, requiring banks to tighten up controls on private bank accounts opened for prominent foreign political figures, their relatives, and close associates.

“In 2003, the United States supported the United Nations Convention against Corruption, which has now been ratified by more than 140 countries. Also in 2003, the US Immigration and Customs Enforcement (ICE) formed a research group dedicated to combating foreign corruption by PEPs.

“The Permanent Subcommittee on Investigation (Subcommittee) initiated this investigation to learn how U.S. laws apply to PEPs using the domestic financial system, and to investigate how foreign high-ranking political figures, their relatives and close associates are laundering of money to circumvent or undermine (AML) and PEP controls to bring money that may be the product of foreign corruption into the United States. It is the latest in a series of subcommittee hearings investigating foreign corruption and its accomplices and instigators.

“The Subcommittee has issued more than 50 subpoenas and reviewed millions of pages of documents, including bank records, correspondence, contracts, emails, property records, flight records, news articles, and pleadings. In addition, the Subcommittee has consulted with foreign officials, international organizations, financial regulators and experts on anti-money laundering and anti-corruption efforts.”

It is recalled that a former US Congressman, William Jefferson, was sentenced in 2010 to 13 years in prison for corruption involving US companies and Nigerian officials.

The ruling of a federal judge, TS Ellis III of the US District Court in Alexandria, Virginia, followed Jefferson’s conviction for collecting bribes on behalf of Nigerian officials, most notably Atiku.

However, the FBI found $90,000 cash, which Jefferson said was intended for the PDP chief, hidden in a freezer.

But Atiku and his wife, Jennifer, did not accept subpoenas and subpoenas to appear in US court.

Instead, they moved to Dubai with their family and put their Potomac mansion up for sale.