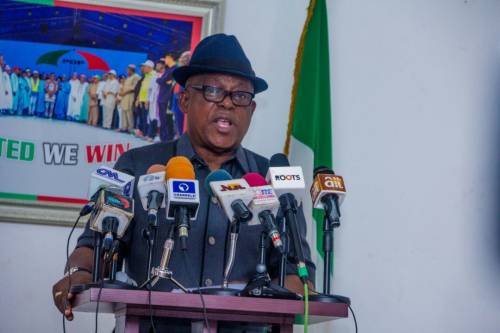 A Supreme Court in Rivers State has issued an interim order banning controversial People’s Democratic Party (PDP) National Chairman Uche Secondus from setting himself up as the party’s national chairman.

The development comes amid calls for his resignation from some members of his party.

A People’s Democratic Party caucus in the House of Representatives had asked Secondus to “honorably” resign from his post over poor leadership of the party.

At the National Secretariat of the PDP, some party members also held placards calling for Secondus to resign.

SaharaReporters had reported last week that Olabode George, a former deputy national chairman of the PDP, advised Secondus to stop interfering with elder statesmen in the country for help in its bid to keep itself in office.

George had responded to the closed-door meeting between Secondus and former President Olusegun Obasanjo in Abeokuta, the capital of Ogun state.

In an interview, George said that Secondus mismanaged the privilege he was granted to manage the affairs of the PDP, but that he ran amok when party members said they had had enough of him.

‘Why is he running around now? When he was given the mantle of office and you were expected to remain just, fair and equitable, did he do so? Let him stop disturbing the old men; let them rest. As I have always said, the PDP does not belong to anyone personally.

“Are you going to repair all the damage he has caused by his inaction or lack of respect for our party’s fundamental standards and constitution? I don’t hate him, but he mishandled the opportunity given to him to run the party’s affairs. He went outside the constitution and threw it down the drain.

“APC also went through their own crisis at the tail end of Oshiomhole, but President Buhari had to take decisive action or that party would have collapsed today. So if the members of the PDP say we are tired of Secondus’ methodology, so be it.

“I have an example of his complete mismanagement. I think he should have done all these things a long time ago. Yes, we know the elders are experienced and we should not ignore their words. But they gave you a chance for almost four years and you screwed up,’ George had said.