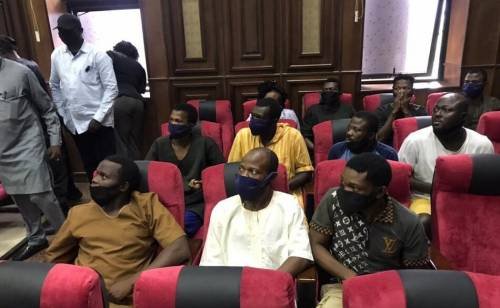 Justice Obiora Egwuatu of the Abuja Federal Supreme Court has overturned a State Department motion calling for the further detention of four of the 12 aides of embattled Yoruba Nation agitator, Sunday Adeyemo aka Sunday Igboho.

The motion was rejected by a judge on Tuesday after its dramatic withdrawal by DSS counsel Idowu Awo.

The secret police had filed a request for pre-trial detention through Awo and asked the court to annul the bail previously granted to the four detained employees of Igboho.

When the case resumed on Tuesday, the DSS lawyer surprised the court when he announced that he would not proceed with the case.

Rather than proceed with the claim, counsel informed the court that he had appealed the bail granted to the four of the 12 detainees and that he would like to continue the appeal to the Court of Appeal.

Judge Egwuatu then dropped the motion after the detainee’s lawyer, Sunday Adebayo, raised no objection.

On July 1, DSS agents stormed Igboho’s home in Soka, Ibadan around 1am, killing two of his associates and arresting about 2 people.

The Yoruba rioter, who escaped the raid, is currently on trial in the Republic of Benin, where he was arrested on Monday.

DSS spokesman Peter Afunanya said that Igboho can run and hide as long as he wants, “the end of his shenanigans” was certain.