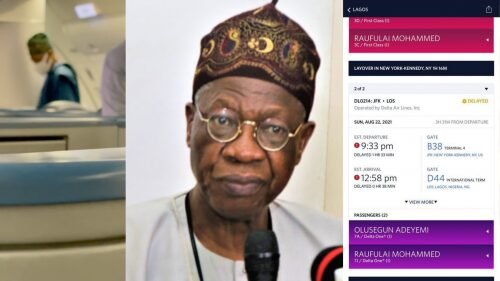 Nigerian Information and Culture Minister Lai Mohammed is on his way back to Nigeria after a futile trip to the US.

Mohammed had traveled to meet top executives of the popular microblogging site Twitter following the suspension of the app in Nigeria by the President Muhammadu Buhari-led government in June.

However, a top source revealed to SaharaReporters that the trip was a pointless journey for the minister as he was unable to meet Twitter executives and was also shunned by US media.

SaharaReporters exclusively obtained a video last Tuesday showing the Secretary of State and Olusegun Adeyemi, Special Assistant to the President (Media), Office of the Secretary of Information and Culture, in a Delta Airline en route to the US.

VIDEO: Nigeria’s infamous Information Minister Lai Mohammed travels to the US from Lagos to meet with @Twitter “Tried to disguise with face hood as he flew on” @Delta Airline from Lagos to New York on seat number 8A#TwitterBan pic.twitter.com/9LLpCGgoMr

“Lai Mohammed and his PA are returning to Nigeria after failing to meet Twitter excos and also the US media he claimed to want to meet in Washington, DC are shunning him,” the source said of their trip to the US.

In the meantime, this newspaper has again obtained the flight data of the duo on Delta Airline to Nigeria.

Information available to SaharaReporters shows that Mohammed and Adeyemi are flying First Class, with a departure time from JFK (John F. Kennedy International Airport, New York) to LOS (Lagos) stated as 9:33 PM, albeit with a delay.
At the JFK, the duo will use Gate B38 at Terminal 4 while their arrival time is 12:58 PM, but also delayed.

For their arrival at the Murtala Muhammed International Airport, Lagos, the duo will use Gate D44.

The total flight time is 14 hours and 15 minutes.

The Buhari-led government banned Twitter indefinitely on June 5, 2021, preventing it from operating in Nigeria after the social media platform deleted tweets posted by Buhari.

Buhari’s tweets, which many Nigerians found distasteful, had warned the southeastern people of Nigeria about the secession agenda and threatened to deal with them “in the language they understand”. His comments referred to the civil war in Nigeria (1967-1970), in which an estimated 2 million South Easterners died of starvation.

However, the Nigerian government claimed the ban was ultimately based on “a litany of problems with the social media platform in Nigeria, where misinformation and fake news spread through it have had violent real-world consequences”.

The ban has been condemned by Amnesty International, the Swedish embassy and the British and Canadian missions in Nigeria.

Domestic organizations including the Socio-Economic Rights and Accountability Project (SERAP) have challenged the ban in court.

Unfortunately, while many Nigerians have circumvented the ban by using Virtual Private Network (VPN), the country’s already battered economy is losing a fortune to the ban every day.

For example, on August 6, the British company Top10VPN estimated that the ban had affected about 104.4 million internet users in the country and cost the country about $366.9 million. The company made the calculations using a tool developed by Internet governance watchdog organization Netblocks, and the Internet Society, a non-profit advocacy organization in the US.