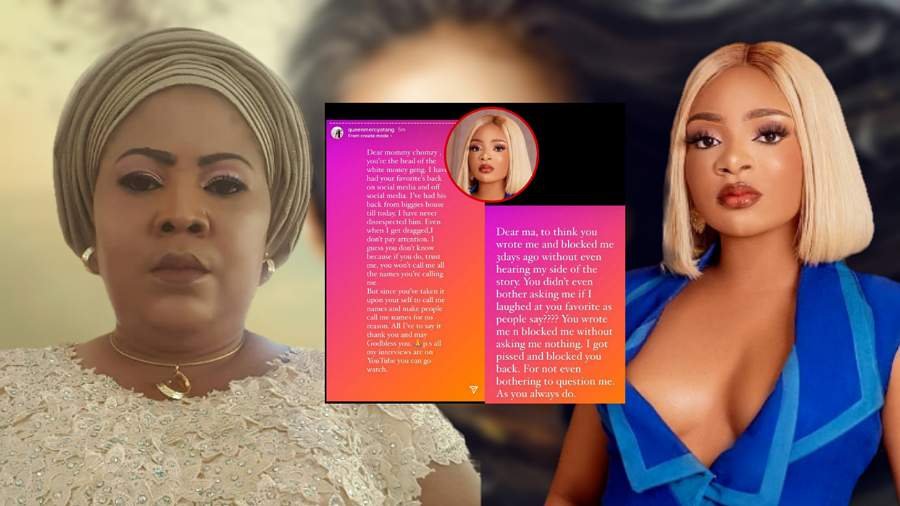 Queen addressed the issue by saying she was doing nothing to fool her best friend Whitemoney. And to tell you the truth, she’s sure Whitemoney fans misunderstood her.

Former Shine Ya Eye contestant and former Big Brother Naija reality show star Queen Mercy Atang took the time to respond to supporters of her colleague Whitemoney, who claimed she laughed when Whitemoney was abused during an interview.

Queen shared her response on Sunday, November 14 via her story on Instagram, where she also posted screenshots of Twitter conversations from Whitemoney fans.

Queen was called upon the microblogging platform and was asked to advise her fanbase to stop making fun of Whitemoney.

She was further charged with allowing an interviewer to abuse Whitemoney while she (Queen) was present and laughing and indirectly making fun of Whitemoney.

Then another Whitemoney supporter, identified as @Mumchomzy, came up with his own response, expressing his anger at what Queen had done.

“If I want to tow it, I do it with the recipe and with a full chest. I am angry now and pray to keep my emotions under control, but a word to your teammates.”

Then, in response to and agreeing with @Mumchomzy’s tweet, a fan identified as @Kenjislingshot added: “It’s pretty funny that some people are so desperate to be on a ship. JB in the house doesn’t like that money, that she only wants it for notes…? She has to go get a motorcyclist for life.’

However, in her response to the accusations made by Whitemoney supporters, Queen denied having mocked Whitemoney. She reiterated that Whitemoney is a friend who has protected her as much as she has.

Queen encouraged Whitemoney fans to believe her when she said she had nothing against her close friend and wouldn’t do it any day. But if they decide to call her, that’s their problem.

She also advised people to go to YouTube and watch her interview to see if she didn’t say or do anything to Whitemoney in her interviews.

Queen wrote: “Dear mama chomzy, you are the boss of the money geng. I got your favorite back on social media and outside of social media. I have protected him from the big house to this day, never disrespected him.

“Even if I’m dragged along, I don’t pay attention. I don’t think you know because if you do, believe me, you won’t call me every name you call me.

“But since you took on the responsibility of berating me and making people scold me for no reason. All I have to do is thank you and God bless you. Please, all my interviews are on YouTube, you can get to them to look.

“Dear Mother, to think you wrote and blocked me three days ago without hearing my side of the story. You didn’t even bother to ask me if I laughed at your favorite as people say??? You wrote to me and blocked me without asking me anything. I was upset and blocked you back. For not even bothering to question me. As you always do.”

Then, on Monday, Whitemoney supporter’s leader @Mumchomzy took to his Twitter page to apologize to Queen and her fans for the allegations. She claimed she was misinformed about the entire saga.

“I have to record my latest tweet because I was misinformed by the female senator hired to schedule the homecoming by the government of Enugu. Unfortunately, she is a ninja, but she does not know how to proceed. Let peace reign because I don’t feed on the internet instead of spending it,” tweeted @Mumchomzy.