Airtel Anniversary Offer: How to Get Free 250 MB and 20 Free SMS

Just a few weeks ago, MTN celebrated its birthday by giving its users free data and airtime, the same goes for Globacom. As Airtel celebrates its anniversary by giving its customers 250MB of data and 20 free text messages, it’s up to you to find out how to get yours by reading this article in its entirety.

Usually, MTN surprises its users with data up to 200MB just to celebrate their anniversary with their customers, but the methods Airtel using is different from Glo’s and vice versa, and what you need to do to get your free Airtel data and the text messages are explained below.

You just need to grab your phone, which contains an Airtel SIM card, and then grab the anniversary-free data and SMS.

Once you dial the code *141*1#, you will be presented with several options as indicated or shown below. 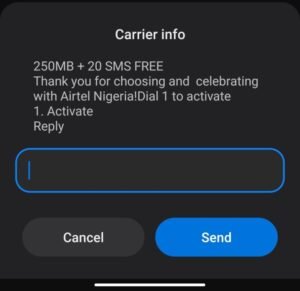 Thank you for choosing and celebrating with Airtel Nigeria! Click 1 to activate.

When you choose it, your Airtel line will be equipped with Airtel’s anniversary offer of 250 MB and 20 free text messages.

However, it was also noted that the data can only be used on Sundays. This means that you have to wait until September 19, 2021, at 00:00 AM to start using the free data. However, you can now activate the data.