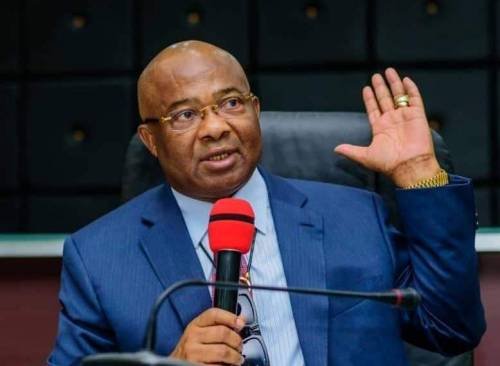 Imo state governor Hope Uzodinma has stated that the ruling All Progressives Congress, APC, is not interested in giving the Igbo presidency in 2023.

Uzodinma spoke while rejecting APC’s claims that his presidential ticket would be zoned to the Southeast region.

Appearing on Channels Television, Uzodinma said that APC is looking for a Nigerian president.

When asked if APC is committed to zoning the 2023 presidential ticket to the Southeast, he replied: “We are not looking for an Igbo president. We are looking for a Nigerian president.

“We as the APC party believe that what we practice here is partisan democracy and that every politician should be loyal to his party. In the end it comes down to the decision of the party to which you belong.”

Uzodinma added that President Muhammadu Buhari’s visit to the state had nothing to do with the 2023 elections.

Uzodinma said that Buhari was just on a working visit.

“Our people came out to receive the president who visited Imo State in solidarity with the governor of Imo State. It has nothing to do with the 2023 elections or politics.

“We only received the president who came on a working visit, commissioned projects and interacted with us,” he added.

Recall that Buhari paid a one-day working visit to the state of Imo on Thursday.

While in the state, the president promised to help Uzodinma fight insecurity.

Buhari also met with Igbo leaders and stakeholders at a town hall meeting.